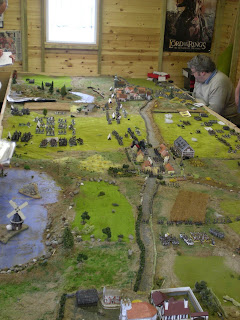 Willy's sand table again, such a great resource, every club should have a 12 foot sand table.

Using Shako 2, we set up and played to a conclusion with a dozen players, and booze.

The Austrians stuck mostly to the same plan as Archduke Karl - take the towns, then cut off the river, and 'Cannae' them. Right down to the rousing speech about sons of Austria, and toasting death to the tyrant. Significantly, explicit orders were given to mask and burn, rather than assault the granary.

The French deployed St Hilaire and Claparede in place of Lassalle's light cavalry as the forward screen between the towns, but otherwise followed a similar set up to said Tyrant.

We also had a smaller 'side table' set up for displaying the bridges themselves. 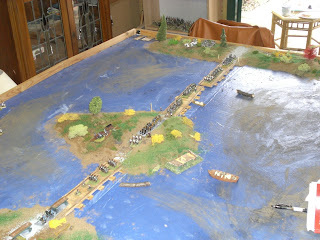 This was played out as a mini game - with the same historical result. After a couple of smaller barges knocked gaps which French engineers were able to repair, the 'windmill' succeeded in destroying a major section of the bridge.

Major tactical decisions were taken as follows:
The initial pressure on Lannes at Essling drew off Lasalle's light cavalry behind the town. This coincided with the first knock to the bridges, at which point Karl formed the main Austrian battery in the centre, and brought forward his cavalry reserve.
This in turn drew in all of the French heavy cavalry and the Guard, who committed themselves far further forward than was probably wise - given their bridge of retreat was suspect to say the least. 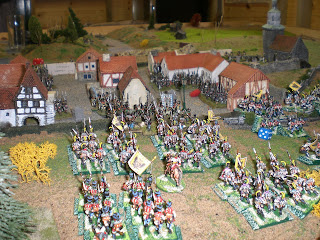 Lannes performed prodigious feats defending Essling before being overcome, at which point, Massena confirmed he had also been forced out of Aspern. Bessieres and Lannes had been broken as effective forces, St Hilaire was similarly broken, and Claparede was under severe pressure. Meanwhile, the Guard, Nansouty and D'Espagne had also been pulled forward to protect the French centre - and failed to make headway before the untouched Austrian holding force, while the Austrian Grenadier Division had yet to be committed.

With the French rear open, both flanks now turned, and the reserve fully committed forward to the middle, a clear Austrian victory was declared.

An absolutely cracking game, and well worth adding to the 'great games' file. 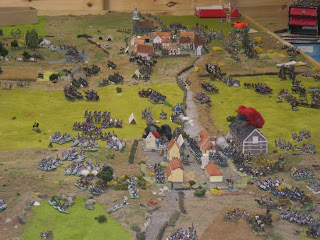 Victory
Posted by Phoenix Wargamers at 23:54 No comments:

In 2006, on the anniversary to the day of the battle, we did a display game at Kirriemuir's show for Auerstadt.

The rules for this were the excellent From Valmy to Waterloo, and the figures were all 6mm Adler, with Timecast buildings.

On the drive up to the show, there was fog on the roads, just to add to the flavour. 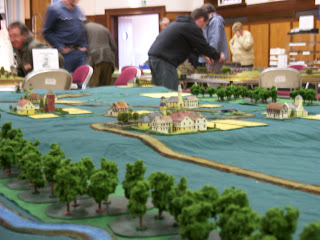 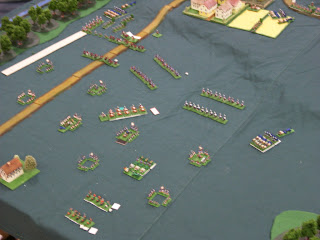 Posted by Phoenix Wargamers at 22:44 No comments:

The rules used were Grande Armee, with Regiments instead of Brigades. 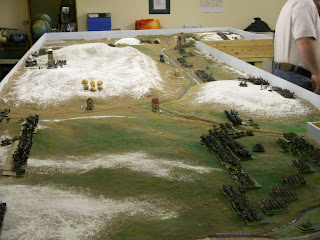 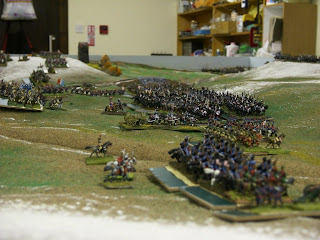 Posted by Phoenix Wargamers at 22:41 No comments:

At the millenium, Simon hosted a series of games baed on the 100 days. 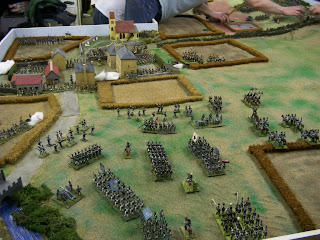 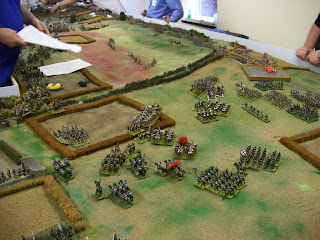 Prussian Arrival
Posted by Phoenix Wargamers at 22:39 No comments:

Sand covered in flour to make the snow, a good time was had by all.

Here are some old pictures. 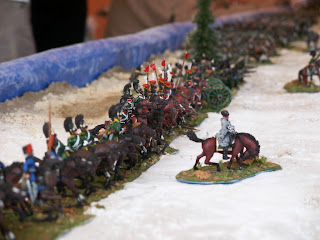 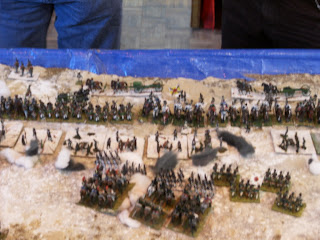 Posted by Phoenix Wargamers at 22:34 No comments: 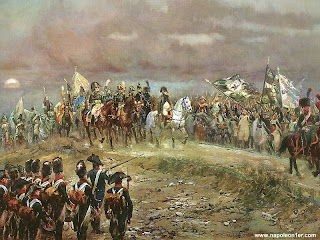 Prompted by the closure of Geocities (and general slackness for over 6 years), Phoenix Wargaming is moving its club website to a series of period related blogs.

This one is for Napoleonic Games.

As an evening club, we tend to play smaller engaagements in the club, to get a finish.

But the big games are our true favourites, and we are lucky to have access to both Simon and Willy's sand tables and wargaming hut for these.

Rules in use include Shako2, LFS and Grand Armee.

Most members have a personal preference, as the posts will show.
Posted by Phoenix Wargamers at 22:27 No comments: