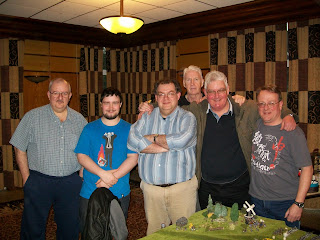 Some of the hardier members popped down to Dumfries for a new show last weekend.

The game was a French Revolution game - and hence, the windmill (there is always a windmill in for some reason) 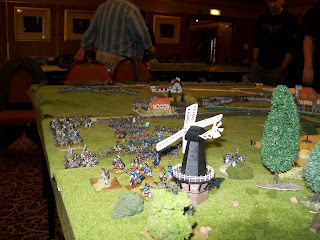 They reported a small show, as expected for a first effort, but with a good days entertainment for all who came, and a nice potential starter to the Wargaming year in Scotland.

All power to the organisers, They are planning for next year already.

Tuesday sees the return of Ricardo Affilado and his band of over achieving Spanish patriots, covering for the incompetence of those overrated rost bifs and freeing Espania from the tyranical French. The Spanish liberation - bringing back the Inquisition, one church at a time!

(Now be honest, you didn't expect that, did you).

Posted by Phoenix Wargamers at 12:35 No comments:

Another Spanish victory to report in the ongoing campaign.

Despite a wholesale cleanout of the Anglo's inept command structure, it still fell to those gallant Spanish patriots to storm the weakpoint in the French barricades and ensure the safe advance of the hapless British.

Even though the bulk of Spains forces were retraining during this mission, those who were on service made the vital incision into the French lines.

Viva free Spain.
Posted by Phoenix Wargamers at 10:02 No comments: