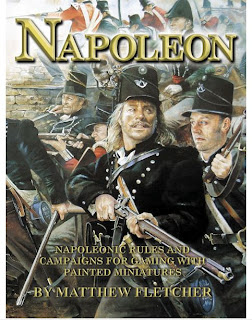 My [signed] copy of the new Foundry rulebook arrived a couple of hours ago. Here are some initial comments.

The book itself is handsomely produced. Good quality binding and a high standard of layout. Text is clear, colours are balanced. Quite a few illustrations from Knotel. Very many pictures of miniatures – with it has to be said a wide variety of quality in respect of the paint-jobs. All the pictures used in the painting section are of beautifully painted figures – some have very good-closeups of difficult to paint portions of a figure [e.g. face]. The same cannot be said for the shots showing units in a game environment – many are frankly badly painted. The terrain and scenery is also quite poor. A bit of a disappointment that as I want all such pics to be aspirational.

An infantry battalion is 6 elements with a recommendation of 4 figures on 40x40 bases. Light cavalry 12 figures on 6 bases. Heavy cavalry 16 on eight [both 40x50] and artillery batteries having four guns [50x80]. That seems to be the same for all nations – except Austrians who get bigger units [8 element inf battalions]. I can see no specific mention of base sizes for 15mm above the usual statement about 'anything goes as long as both sides are compatible'.

The game allows different formations – line, column [of attack, and of march], square etc. Interestingly [for a Nap rule nerd like me] the column is 2 wide and three deep rather than 3x2. Advanced rules allow ordre mixte, divisional squares and the like.

In respect of forces an example is given of a small starter-sized game army having 6 battalions, two skirmisher detachments, one battery and one unit of cavalry. This is given as a force with a value of 250 points. The army lists imply that much larger forces can be used but I can't immediately find a specific recommended points value for a ‘standard' game – ala 1500 for WAB. A figure of 500 is mentioned in the army lists, but not explicitly as a suggested standard size. If 500 is intended as the standard then based on the example given I estimate a force as being about 300 infantry figures, 30 cavalry and 8 guns with crew.
Army lists are by ‘campaign' [year/theatre] and take up about half the book! No Ottomans. Some French allies are covered –Bavaria, Silesia, Saxony.

A division is typically given in the army lists as up to 5 battalions. 2 regiments in a cavalry brigade – two of which can be combined into a division. Elite formations and artillery are a [in numbers] function of line divisions taken. A few random points values from the French 1813 list. Marie-Louise's – 10 points. Line infantry – 15. Old Guard – 40. Foot Artillery – 60. Dragoons – 40. Guard Heavy cav -55.

The main rules themselves only take up thirty pages [of 226]. Turn sequence is:

Of those, the one that seems to have the most originality is the ‘Resolve Command Cards' segment in which units in engagement distance [2x move]of the enemy are given VERY specific instructions [e.g Charge!, Stand and Fire!, Run!] by use of command cards which are hidden from your opponent until this phase. The cards are available as a download on the Foundry webbie.

Players alternate moves by divisions. Volley fire has a range of 15 inches. Artillery 48". Columns can fire ineffectively. Units have a quality rating from militia-line-elite-guard. Skirmies don't appear on table in the basic rules but are factored into the rules for firing.
Each nation has some specific rules to benefit/hinder it as a means of generating flavour. Examples: British cavalry have command penalties, Russians get discounted artillery, French divisions may get ‘free' moves at the beginning of the game.

My general impression here is of simplicity and quickness. Whether you think those are bad things is up to you. To me they're not.

The book contains an extensive section on painting figures. Inevitably I am reminded of the Dallimore book, but I can't spot any direct recycling. Interesting sections on mass production quickly and also on improving specific parts of your figure painting. As per the Dallimore book the colour guides exclusively reference the Foundry paints. Each nation gets some specific advice and a short description/examples/origin/role of a good range of troop types.

The potted history covers the entire period. Fairly basic but covers the main campaigns. The information on formation structure is well done and would be very helpful to someone new to the period.

Michael.
Posted by Phoenix Wargamers at 04:33 No comments: