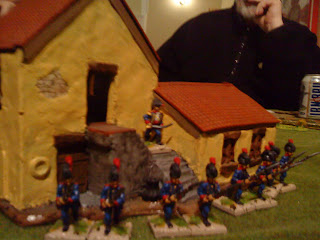 The final Sharpe Practice dispatch for the campaign year.

My friends, I must report that Espania will remain under French domination for another year.

Those godless rationalists will continue to hold sway over our gallantly superstitious folk.

Yet again perfidious Albion has done a runner to the coast.

I can, however, report that we Spanish patriots continued to make a bold and valiant stand in defence of all that is great about Spain and her wines.

You will recall that I was instructed to train up some new recruits whilst an assault was made on a small emplacement. That action proved successful due to the timely arrival of our gallant Spanish irregular comrades in arms.

Thus it was, that with brave hearts and clean buttons, my new light company first saw action in a less than noble covering of the spotty English arse.

We were delegate the point of honour, covering the last good men over the bridge.
We held this position with utmost honour and diligence until not only had we received the blessings of his grace the Duke himself to fall in behind but also until the English commanding major had for the third time, ordered us to join the retreat. Let it not be said that the defenders of Spain were in haste to vacate the presence of the enemy.

On joining the retreat, we duly move to a position to protect the rear of the column, and maintained that point of honour until the lines were secured.

During the day itself, my new recruits were able to claim their first battle honours, seeing off numerous charges by enemy cavalry, and even being so bold as to take a shot or two at the French general, as he ventured too close to our lines – a feat he will not dare to perform again when he sees the brave men of Spain to his front.

Naturally, we also took the opportunity to make absolutely certain that a valuable consignment of Spanish wine did not fall into the hands of the disintegrating English forces. In fact, it is fair to say that outside of those troops under the personal command of the English major, no English formation retained any order once they saw the full measure of the approaching Frenchmen. 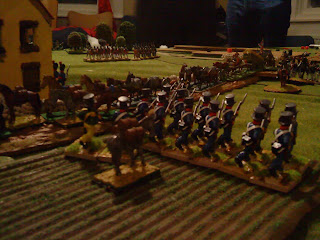 It was left to the men of Spain once again, to retain dignity, honour discipline and formation in the face of the enemy.

I personally took command of the train in order to ensure that it completed its journey – As he was passing, his Grace personally requested that I ensure his honour remained intact by maintaining his record of never having lost a gun – which I was proud to do for him.
His recognition of my qualities and those of my men gladdened the hearts of my stout fellows, who were somewhat dismayed until then by the disintegrating rabble of red coats they were watching fall back behind. For all the disappointments which the army he was given, Wellington himself must be considered a capital commander and one we will be happy to serve under whilst necessity requires the aid of our foreign friends.

With the baggage and guns secured behind the river, we continued with the retreat, maintaining our position as rear guard throughout.

Sadly, as usual, more of these English captains failed to maintain a proper respect, and simply refused to obey perfectly clear orders. In fact I saw two companies march forward and surrender, despite drum signals for them to fall in behind. Had they advanced to attack, I would consider them brave but foolish. As the attack did not materialise, one must draw a different conclusion about the mettle of these men.

Others, who we know were ordered to cover the road, simply wandered off of their own accord and were never seen again.

Perhaps the sheer number of them surrendering to the approaching Frenchmen delayed the advance.

For our own part, we saw action again, suffered no casualties, and brought down a good number of enemy horsemen – who are always the most dangerous threat when on a retreat, as His Grace personally conveyed to me during the engagement.

Perhaps next year, a new army will be able to achieve more than this. I certainly expect it will require a greater involvement of Spanish and our Portuguese allies, from what I have seen of these poor excuses for English solders so far.